* In case of any delay in receiving the OTP, you may verify it later. Please proceed without verification.

Your mobile number is not registered with us. Please register your mobile no.

Enter your City name or Pincode

The Malayam derivative ‘Cherthala’ is made up of two words that is ‘Cher’ or ‘head’ and ‘Thala’ which is ‘mud’ and ‘head in mud’ can be taken as the closest meaning. This significant meaning can be traced back to the legend centered around the renowned Hindu saint of Kerala namely Vilwamangalam Swamiyar. 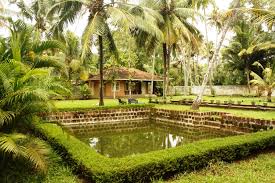 It is believed that the eminent saint had found the idol of the goddess or Devi lying with its head in the muddy waters of a pond. He removed the idol, cleaned it and installed the idol within the holy temple that he got constructed on the edge of the pond. The devi came to be known as the Cherthala Karthiyayani. The ancient idol has been consecrated in the temple, Sree kovil, which lies below the ground level and because of this the idol is not visible directly as devotees enter the temple precincts. This is another unusual feature of the temple.

According to another story Cherthala means ‘joined’ and ‘thala’ denotes nearby land. The literal meaning being that some time in history the land had not been a part of the current land mass but had belonged to the erstwhile state of Travancore. Later under some historical event the land had been joined to Cochin.

The Municipality of Cherthala is spread over an area of over sixteen square kilometers and holds a population of about forty five thousand persons. This makes for a density of around three thousand persons per square kilometer. The number of women (51%) is slightly more than the men (49%). The small municipality has a high literacy rate of 97.4% among the males and it is 89.7% among the females.

Cherthala falls in the Alappuzha Lok Sabha constituency. The Vidhan Sabha Constituency, however, belongs to Cherthala and Aroor.

The Karthyayani Devi Temple is the main temple. It has a huge complex which has smaller temples. Some of these temples are the Shiva and Vishnu temples. On the opposite side are located the sub temples which have the ruling deities of Ayyappa (popular also as Kaavudayan) and Kshethrapalakan. The latter has been worshipped as the caretaker of the Devi’s temple. An interesting feature of the Karthyayani Temple is the large number of roosters who strut about within the temple precincts. These birds are the offerings of devotees as part of an ancient tradition.

The temple has an annual eight-day festival. The main offering at the temple is rooters. The festivals is held with great and pageantry.

The Muttathu Thirumala Devaswam temple has Lord Narasimha as the ruling deity. The Saligrama is the consecrated form of the presiding deity in the temple. The other deities installed in the temple are Sree Venkata Chalapathy Moorthy along with Bhoo Devi as well as Sree Devi. The annual festival of the Karthyayni Devi temple is held during the harvest festival which falls during the ‘Kumbham’ month of the Malayalam calendar. This coordinates with February-March. The festival lasts for eight days.

The Sree Mutharamman Kovil temple located at Kambikkal junction is a temple located near the main market. They are devoted to Goddess Mutharamma and also Goddess Amapoorneswary. Other lesser duties are the Navagraha and the childhood Ganpathy.

The Sree Mahadeva temple has Lord Shiva as the presiding deity. The Moothickal Sri Lakshminarayan Temple is dedicated to Lakshmi, the Goddess of Wealth and her consort, Naryana, the generator of the World.

The Peechi Amman Kovil is also located nearby while the Vellorvattam Mahadeva temple is another neighbouring temple.

Cherthala is an important centre of the thriving coir industry of the Malabar coast. It has several units dedicated to the processing of coir which is extracted from the coconut out casing. A number of world renowned import and export houses are based in Cherthala and its surrounding area.

How to Reach Cherthala

Cherthala is situated in Alappuzha district of Kerala. By road it is a mere 30 kilometers towards the southern parts of Kochi and short drive of 22 kilometers from the northern side of Alappuzha town located on the National Highway number 47. It is also accessible from the international airport of Kochi which lies about twenty kilometers away.

Are you a Business Owner?

Add the products or services you offer